Here are The Korea Post news and notice, humor from Korean-language economic dailies and a roundup of important headlines from all major Korean-language dailies, TV and other news media this morning: 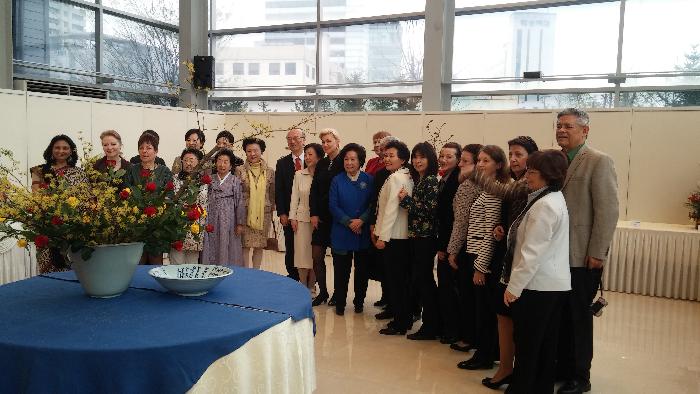 Co-President Mrs. Anne Wight of the Club (wife of the British ambassador, second from left) pose

on the round table in addition to the individual works on display. Ambassador and Mrs. Bessho

Koro of Japan are seen seventh and eighth from left, respectively, in the rear row.

Has Your Excellency made a reservation for The Korea Post tour of the Dangjin City for the Ambassadors and Madams on Friday 11 April 2014?

The Tour consists of:

Attending the opening ceremony of the traditional Korean Tug-of-War

Hands-on-experience of interesting cultural events, including trying-on of Joseon Dynasty costumes and photo-taking,

A visit to the plush Guest House and production facilities of Hyundai Steel, and

A visit of the Sacred Land of St. Kim Dae-geon.

In case Your Excellency has not yet received the Invitation, there is re-run of the invitation and itinerary of the Tour at the end of this Headlines.

Is your National Day coming up soon? Or is the Head of State of your country visiting Korea soon?

You may have the portrait painting of your Head of State painted by a famed Korean portrait artist who has painted the portraits of President George W. Bush, President Lee Myung-bak at Cheong Wa Dae, President Park Chung-Hee, the then First Lady Park Geun-hye and various other most important persons of Korea and the world.

Please visit the following sites of The Korea Post Internet for sample paintings.

Artists Kim has painted many important figures of Korea and the world.

A young lady is in the hospital for an operation.

She says, "Doc, how long after my operation will I have to wait until I can have sex again?"

He says, "You know, Miss Stukowski, you're the first person who ever asked me that before a tonsillectomy!"

At a luxury hotel in San Francisco, a woman stepped into the glass-enclosed outside elevator to ride down from the rooftop lounge.

“You know,” she remarked to another woman, “my husband would hate riding this elevator. Heights make him dizzy and sick to his stomach.”

She paused a second, and then added, “And he’s an airline pilot.” The elevator descended a few more floors before one man asked softly, “Which airline?”

S. Korea, US, Japan's Nuke Envoys to Meet on Monday

South Korea, the United States and Japan have jointly announced that their chief delegates to the six-way nuclear talks will meet in Washington on Monday.

The drone which crashed on Baengnyeong Island in the western sea border on Monday is confirmed to have taken photos over the border islands, Socheong and Daecheong.

Kolon wins in appeals court over DuPont in U.S. lawsuit

A U.S. appeals court on Thursday overturned a 2012 verdict against Kolon Industries Inc. of South Korea that awarded DuPont Co. $919.9 million in damages.

The chief nuclear envoys of South Korea, the United States and Japan plan to hold trilateral talks next week to explore ways to persuade North Korea to give up its nuclear weapons, the foreign ministry here said Thursday.

Libya closed its embassy in North Korea last year and its relationship with the communist country is at "the minimum level," the South Korean envoy to the North African country said Thursday.

South Korea's first international seaweed-themed expo on Wando island is undergoing the finishing touches before its opening one week from now, organizers sa..

Kolon wins in appeals court over DuPont in U.S. lawsuit

Hyundai Motor Co. said Thursday that the base price for its all-new Genesis premium sedan to be sold in the United States has been set at US$38,000.

Hanwha Engineering and Construction Corp., one of South Korea's leading builders, said Thursday that it has received an additional 540 billion won (US$510.6 million) in advance payment for its Iraq city project that will kick off next month.

Obama may visit Seoul on April 25

WASHINGTON (Yonhap) ― The North Korean regime is so dangerous that it can attack South Korea w...

Perhaps it is not surprising that a gap exists between Silicon Valley IT firms such as Google a...

It is a widely known fact that the retail sector is one of the least transparent segments in Korea.Kickba...

Drones from the North

The Defense Ministry’s conclusion that the two drones recently found near the inter-Korean ...

The 19th National Assembly wraps up the first half of its four-year term with a monthlong ex...

South Korea was found to have the world’s seventh-highest ratio of services provided by “shadow banks” -- referring to financial institutions that are not actually banks but deliver similar roles -...