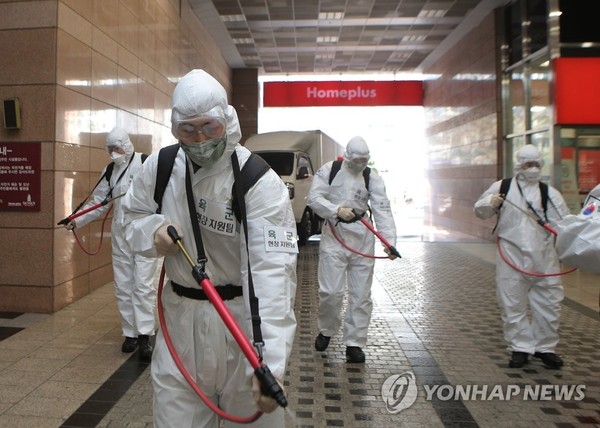 South Korea reported 518 new cases of the coronavirus on Friday, bringing the nation's total number of infections to 6,284, with most new virus infections still spiking in the southeastern city of Daegu, the epicenter of the virus outbreak here, and neighboring North Gyeongsang Province.

So far, 42 people, mostly elderly patients with underlying illnesses, have died in South Korea from the respiratory virus that emerged in China late last year, the Korea Centers for Disease Control and Prevention (KCDC) said.

About 60 percent of confirmed cases have been linked to a branch of the Shincheonji religious sect in Daegu, the country's fourth-largest city with a population of 2.5 million.

However, health authorities have shifted their focus to testing ordinary citizens in Daegu, citing an alarming level of community spread in the city.

Of the 518 new cases, which were detected on Thursday, 367 are in Daegu and 123 in North Gyeongsang, the KCDC said.

Other major provinces and cities have also reported some infections, with Seoul reporting two additional cases.

Since raising the virus alert level to "red," the highest level, on Feb. 23, health authorities have focused on halting the spread of the virus in Daegu and North Gyeongsang. (Yonhap)