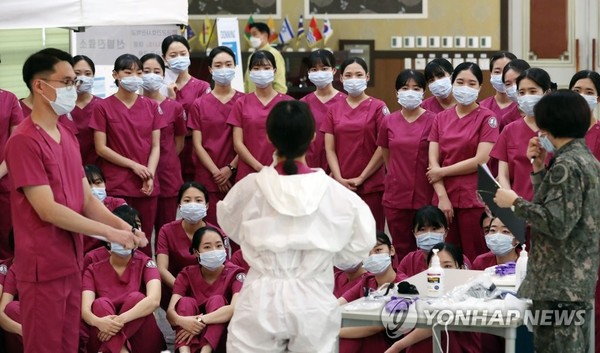 South Korea's new coronavirus caseload approached 5,200 on Tuesday, with an alarming cluster of infections continuing to swell in the southeastern city of Daegu. President Moon Jae-in declared a "war" on the fast-spreading virus.

The 374 new cases, which were identified over the past 16 hours on Tuesday, brought the nation's total number of infections to 5,186, the Korea Centers for Disease Control and Prevention (KCDC) said.

Tuesday's additional cases followed 600 new cases on Monday and the nation's sharpest daily spikes of 1,062 on Sunday and 813 on Saturday.

So far, 31 people, mostly patients with underlying illnesses, have died in South Korea from the respiratory virus that emerged in China late last year. Daegu, the epicenter of the virus outbreak here, reported three more deaths from the virus on Tuesday.

The KCDC said 56.1 percent of confirmed cases nationwide have been linked to a branch of the Shincheonji religious sect in Daegu, the country's fourth-largest city with a population of 2.5 million.

The justice ministry said last week that some members of the religious group visited the Chinese city of Wuhan, the global epicenter of the virus.

Of the new 600 cases detected on Monday, 520 are in Daegu, 300 kilometers southeast of Seoul, and 61 are in neighboring North Gyeongsang Province, according to the KCDC. The total number of cases in Daegu and North Gyeongsang stood at 3,601 and 685, respectively.

"The crisis in Daegu and North Gyeongsang Province reached its peak, and the whole country has entered a war against the infectious disease," Moon said in a meeting with masked Cabinet ministers and senior health officials.

Moon ordered all of the government's organizations to shift to a "24-hour emergency situation room system," citing the need to bolster readiness to handle quarantine and economy-related measures.

Vice Health Minister Kim Gang-lip told reporters that authorities will expand virus tests on ordinary citizens in Daegu as they have completed tests on Shincheonji followers who have shown symptoms.

Kim said the top priority of testing in Daegu shifted from Shincheonji followers to ordinary citizens to curb the spread of the virus.

According to the central government and Daegu city, about 2,300 confirmed cases in Daegu were tied to Shincheonji. So far, about 11,000 ordinary citizens in Daegu have undergone tests and 1,300 have tested positive for the virus.

The number of Daegu's virus patients who are not tied to the religious sect has been on the rise, Kim said, adding that the spread of the virus in Daegu has reached a "certain level" of community transmission.

The government will set up more isolation facilities in Daegu by early next week to admit some 2,000 virus patients, Kim said.

Kim renewed calls for citizens to increase their "social distancing," wash their hands with soap and avoid crowded places, saying, "The first-line of defense depends on people."

Kim noted that it is difficult to judge whether the virus is spreading faster to other regions as about 90 percent of confirmed cases have been in Daegu and North Gyeongsang.

A medical worker collects a sample from a citizen in a car at a drive-through clinic in front of Seoul Olympic Main Stadium on March 3, 2020, to test for the new coronavirus. (Yonhap)

Aside from Daegu and North Gyeongsang, cases of community spread with unknown origins are gradually on the rise. Seoul's confirmed cases rose by seven to 98, with 14 cases linked to Eunpyeong St. Mary's Hospital in the Eunpyeong district.

In the central cities of Cheonan and Asan, 55 of the total 81 patients came from a Zumba dance class in Cheonan, officials said.

Still, it is unclear how the virus began spreading at Shincheonji's Daegu branch.

KCDC Deputy Director Kwon Jun-wook told reporters that two Shincheonji followers visited Wuhan "after January" and that one of them tested positive for the virus in late February. China imposed a lockdown on Wuhan on Jan. 23.

It is difficult to judge whether the Shincheonji follower may have affected mass infections at the Daegu branch because most Shincheonji patients developed symptoms from Feb. 7-10 or Feb. 14-18, Kwon said.

South Korea has tested more than 120,000 people so far as part of the government's aggressive response to swiftly intercept the virus and isolate the sick. Kwon said there is "no problem" in the supply of test kits.

Since then, the nation has seen an explosion in infections as it has accelerated virus tests on potential cases.

People form a long line outside a department store in Seoul on March 3, 2020, to purchase face masks amid concern over the spread of the new coronavirus. (Yonhap)

South Korea has released 34 fully recovered novel coronavirus patients from hospitals as of Monday at midnight, up 3 from a day earlier, the KCDC said.

The number of people being checked for the virus and under quarantine came to 35,555, it added. The country has tested a total of 121,039 suspected cases, with 85,484 testing negative.

Currently, there is no evidence that the new coronavirus is airborne. The World Health Organization said the virus is transmitted through droplets or close contact. The best measures to protect yourself from the virus are to wash your hands with soap for at least 20 seconds and avoid mass gatherings, health officials said.

To help raise awareness of the virus among foreigners in South Korea, Arirang TV and the state-run Korea Culture and Information Service (KOCIS) said they are offering simultaneous English-language translation services on daily media briefings by health authorities via Arirang TV's YouTube channel (www.youtube.com/user/arirang) and the website of KOCIS (www.korea.net). (Yonhap)