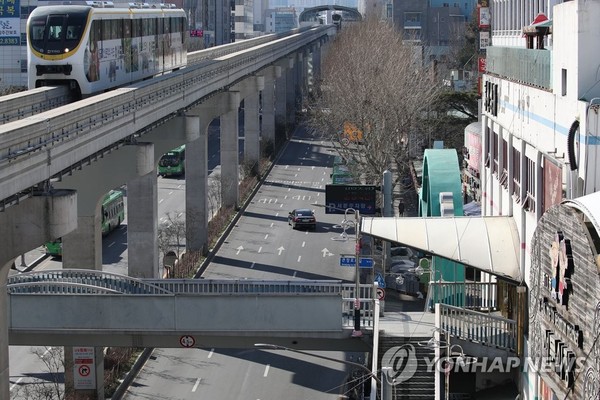 South Korea on Sunday reported its sixth death from the new coronavirus with the number of the total confirmed cases spiking to 602, forcing the country to raise the virus alert to highest level.

Despite stepped-up quarantine efforts, health authorities added three deaths and 169 additional cases to the daily tally that deepened fears of contagion across the country and led to a one-week delay in the start of the new school year set for next month.

The sixth victim of the novel virus was a patient at Daenam Hospital in the southeastern city of Cheongdo, where the country's first COVID-19 fatality took place and more than 110 people, including nine medical staff, were found to be infected.

The 59-year-old man was confirmed to be infected on Wednesday and died at Dongguk University in Gyeongju, North Gyeongsang Province, while being treated for the disease.

The fifth death was reported from the southeastern city of Daegu, where more than 300 people traced to church services are confirmed to have contracted the virus.

The 56-year-old woman died at Kyungpook National University Hospital, while being treated for the novel coronavirus.

The fourth victim was confirmed to be infected on Wednesday. The 57-year-old patient suffered from serious pneumonia before being infected with the virus.

Amid the rise in the number of deaths and infections, the country raised the virus alert level to "red," the highest in its four-tier system, for the first time in more than a decade.

The alert level change represented Seoul's efforts to focus both on insulating the country from contagion by foreign visitors and on halting community spread and minimizing damage from the virus, officials said.

"The COVID-19 incident has been confronted by a grave watershed," President Moon Jae-in said. "A few days from now is a very important moment."

To beef up containment efforts, the government plans to install a new disaster countermeasures headquarters. Prime Minister Chung Sye-kyun will head it with the health and interior ministers serving as its deputy chiefs.

Calling for citizens' concerted efforts, Health Minister Park Neung-hoo said that the next seven or 10 days will be the most crucial juncture in fighting the virus.

"The COVID-19 is spreading quickly, but it is limited within a specific region and group," Park told a briefing.

Most COVID-19 infections are centered on a religious organization in the country's fourth-largest city of Daegu and the neighboring Daenam Hospital.

On Friday, South Korea declared that Daegu and its adjacent county Cheongdo are "special care zones."

Of the 169 new cases, 95 are related to worship services of the Shincheonji church in Daegu, according to the Korea Centers for Disease Control and Prevention (KCDC).

The number of cases that can be traced to the church services reached 329, accounting for more than half of the total cases here.

A total of 117 new cases were in Daegu, a city of roughly 2.5 million, with 25 new virus incidents reported in the surrounding North Gyeongsang Province, it added.

Authorities said they have acquired a list of members from the Daegu-based Shincheonji church and are closely monitoring them.

The KCDC earlier said it has placed more than 9,334 Shincheonji members in self-quarantine. Of them, 1,248 have shown COVID-19-related symptoms.

From North Gyeongsang Province, 18 out of 39 Catholic pilgrims who recently travelled as a group to Israel have been confirmed to be infected with the new coronavirus.

Gwangju in the southwest and the southern island of Jeju also reported several new cases each, while the southern port city of Busan reported eight more virus patients, in a sign that the virus may spread quickly nationwide.

The total number of cases from Busan reached 13.

South Korea confirmed its first new coronavirus case from a Chinese woman from Wuhan, the epicenter of the virus outbreak, on Jan. 20.

A Catholic church located in Daegu, around 300 kilometers southeast of Seoul, is closed on Feb. 23, 2020, to prevent the spread of the new coronavirus in the city. (Yonhap)

Prime Minister Chung, in a rare public message on Saturday night, reassured people that the virus can be contained if the public cooperates with the government's instructions.

Seven patients with underlying illnesses are in relatively critical condition, with three of them on life support, the health authorities added.

On Sunday, a 16-month-old baby from Gimpo, west of Seoul, was reported as the country's youngest virus patient. Hours earlier, a 4-year-old child from Daegu was confirmed to have the virus.

Last week, an 11-year-old child was also diagnosed with the virus.

It also ruled out rumors that the country is short of medical supplies to treat COVID-19, including the anti-HIV medication Kaletra.

South Korea will maintain efforts to keep a stable supply of such pharmaceutical goods, it added.

The country's health authorities earlier advised local hospitals to use Kaletra or Chloroquine -- used to treat malaria -- for patients of the new coronavirus.

The number of people being checked for the virus and under quarantine came to 8,057, it added. The country has tested a total of 26,179 suspected cases, with 17,520 testing negative.

Meanwhile, the Military Manpower Administration said that it would suspend its examinations of potential conscripts to determine whether they are fit for mandatory military service for the next two weeks as part of efforts to help contain the spread of the virus. (Yonhap)