A senior North Korean official is believed to have looked around areas near a smartphone factory in Vietnam owned by South Korean tech giant Samsung Electronics Co., sources said Sunday.

The move is prompting speculation that North Korean leader Kim Jong-un may seek to visit the Samsung factory when he travels to Vietnam for his second summit with U.S. President Donald Trump.

Kim Chang-son, known as North Korean leader Kim Jong-un's de facto chief of staff, and other officials arrived in Hanoi Saturday to check logistics for a second summit between Trump and Kim slated for Feb. 27-28.

The Kim delegation left the Vietnamese government's guest house in Hanoi at around 7 a.m. and headed north to the Bac Ninh province where a smartphone-producing line by Samsung Electronics is located, according to sources.

The group is believed to have driven around the areas surrounding the factory and assessed the routes to and from Hanoi.

North Korea and Vietnam are believed to be preparing for a state visit by Kim Jong-un to Vietnam on the occasion of his summit with Trump.

If Kim's possible visit to the factory is realized, he could send a message to the international community that his country will seek to develop the North Korean economy through reform and openness.

"We have yet to have receive any notice from authorities that North Korean officials would visit Samsung factories," a Samsung official said.

Samsung Electronics built factories in Bac Ninh in 2008 and Thai Nguyen in 2013. Since then, almost half of its smartphones have been produced in Vietnam.

The delegation led by Kim Chang-son is known to have visited Ha Long Bay, a famous tourist destination located east of Hanoi.

Ha Long Bay is cited as a place Kim Jong-un may visit.

The group is also believed to have looked around the northeastern Lang Son province, which borders China.

Some North Korean watchers said that the delegation might be assessing the possibility of using a special train to reach Vietnam. It would be possible to drive from a train station in Lang Son province to Hanoi.

Citing sources, Reuters earlier reported Kim will arrive in Vietnam on Feb. 25 ahead of his summit with U.S. President Donald Trump.

The report said the North's leader will also visit the Vietnamese manufacturing base of Bac Ninh and the industrial port town of Hai Phong.

If Kim pays a state visit to Vietnam, he will be the first North Korean leader to make such a trip to the country in 54 years. Kim Il-sung, the country's late founder and grandfather of the incumbent leader, visited Hanoi in October 1964.

Kim Chang-son, an official at the State Affairs Commission, was in charge of protocol during the Trump-Kim summit in Singapore last June. 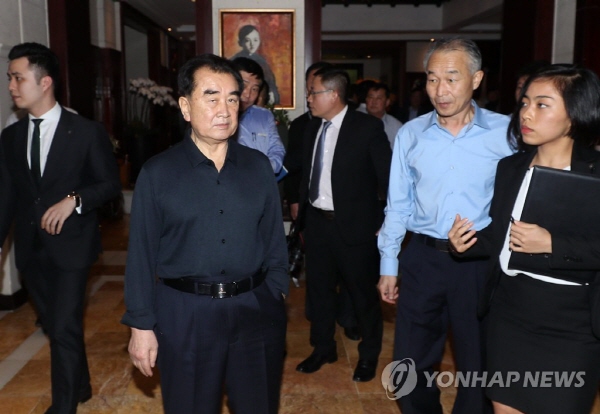 According to multiple sources, Daniel Walsh, U.S. assistant to the president and deputy chief of staff for operations, and other senior officials also arrived in Hanoi on Friday to prepare for the upcoming gathering.

Trump and Kim are expected to focus on fleshing out North Korea's denuclearization and Washington's corresponding measures at the upcoming summit.

They issued a vaguely worded statement at the Singapore summit, in which Kim pledged to work toward the complete denuclearization of the Korean Peninsula.(yonhap)